Amid mounting concern the that UK will crash out of the European Union without a Brexit deal, the country’s leading campaigning union, Unite, is to reconvene with cabinet minister Michael Gove today (Wednesday 9 October) to warn that time is running out for the government to prove that it cares about the jobs and communities most at risk from a calamitous exit. 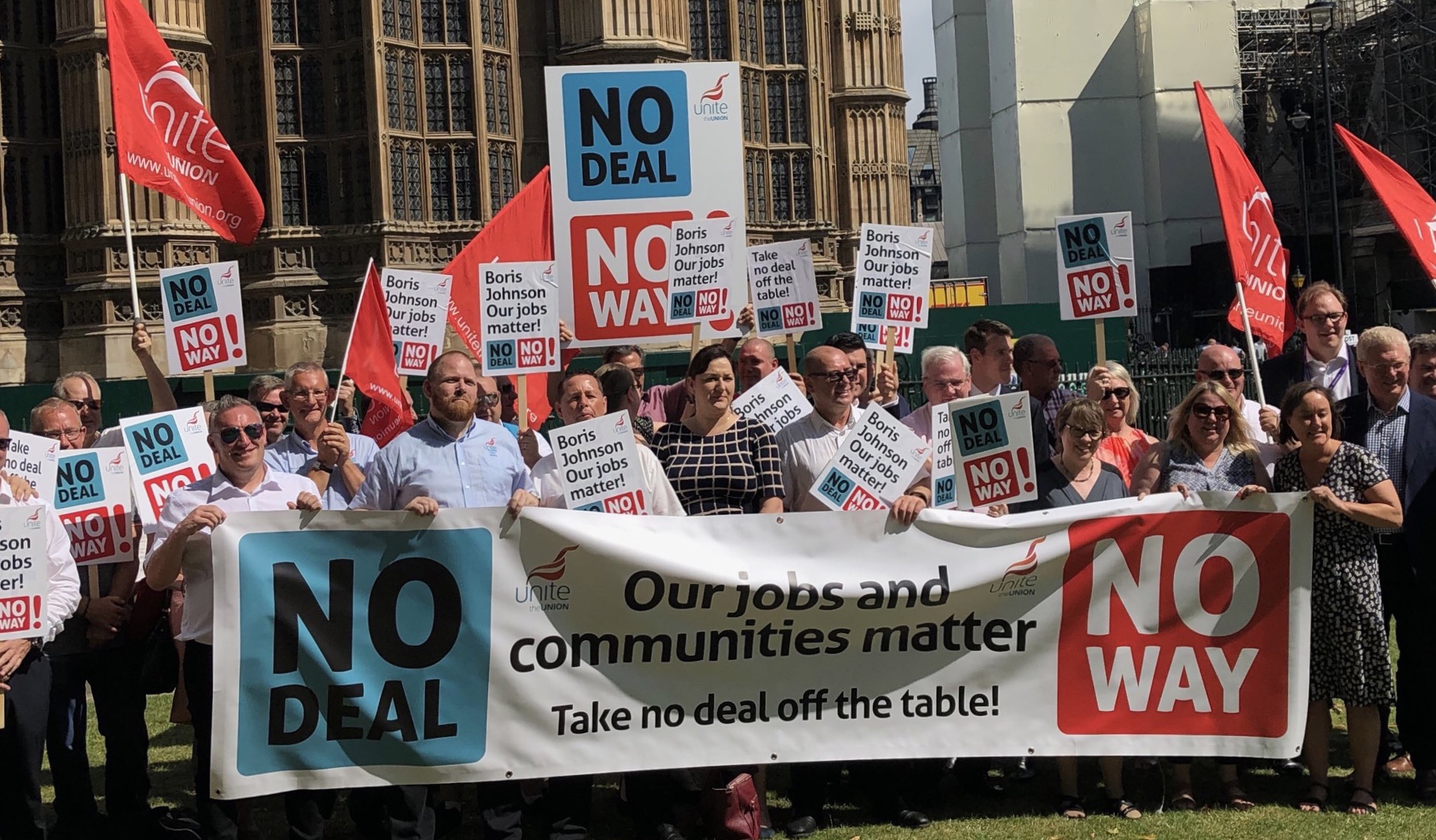 Leading a delegation of long-serving manufacturing workers with deep knowledge of their industry, Unite will meet with Michael Gove, the minister responsible for coordinating the governments Brexit strategy, in what could become a last ditch bid to persuade ministers to comprehend the enormity of a no deal Brexit on working communities.

Representatives from Jaguar Land Rover and Rolls Royce will be among those seeking clear answers to issues raised in previous meetings and to urge ministers to finally grasp the sheer scale of the catastrophic impact a no deal Brexit will have on jobs and communities.

The union says that previous meetings with ministers have revealed a desperate lack of understanding of both modern manufacturing and the ramifications of the policy being pursued by government.

Ahead of the meeting, Steve Turner, assistant general secretary for Unite said: “We are really hoping today for a sense that the penny has dropped, that government now better understands the grave dangers no deal poses to the jobs of working people.

“Our previous meetings left us with no confidence that the government was facing the realities of a no deal on our manufacturing industries and too ready to brush off evidence-based argument as ‘project fear’. I would ask them not to be so cavalier when we return today with representatives who between them have hundreds of years of experience of this sector, who are telling them to their face that a no deal Brexit is a death sentence for jobs and investment.

“Time is rapidly running out.  We need you to rule out any threat of a no deal Brexit and the disastrous consequences that will follow. Our world class manufacturers cannot move forward with investment in new plant or tooling, replacement models or new designs because of the fear that within weeks the massive uncertainty currently facing the sector will become unprecedented chaos.

“I am appealing to Mr Gove:  please listen very carefully to these workers and give them the assurances they need that you get it and you care. If you cannot do that, it won’t be because you don’t understand the impact of what you’re doing.  We’ll have to conclude that you and the government you represent simply don’t care.”

Attending the meeting with Mr Gove will be Mick Graham, Unite convenor at Jaguar Land Rover. He said: “I just don’t recognise the rosy glow that Mr Gove and other ministers are trying to put on their Brexit strategy. It bears no relation to the realities of Jaguar Land Rover where we rely on frictionless trade and open customs arrangements to ensure the just in time delivery of the 20 million components our plants consume every day.

“Right now, I can’t look my colleagues in the eye and tell them that everything will be fine because it won’t be.  This is Mr Gove’s chance to convince me otherwise.”

Tony Pearson, Unite convenor at British Steel, added: “British Steel supports  the jobs and livelihoods of 25,000 people directly and across our supply chain.  We produce a product vital to our country’s manufacturing base but it will be hanging by a thread if no deal is the Brexit outcome.

“I come from a community that was hit hard by the impact of 1980s Conservative ideology under Mrs Thatcher.  We will not let another government destroy our jobs and communities. These are people we are talking about, with bills to pay, families to raise and communities to support.  We will not allow them to be treated as collateral damage for those hell bent on a no deal or bad Brexit.”

Unite representatives from other manufacturers added their concerns about the impact of no deal on jobs in the UK’s manufacturing heartlands:

“A no deal is not an option. It will be catastrophic for our members and would risk up to 15,000 jobs in and around the area.” Peter Tsouvallaris,  Unite convenor Toyota Manufacturing, Derby.

“As far as I’m concerned, no deal must be taken off the table because you’re going to affect 40,000 jobs in the north east and across the UK. We need frictionless borders and no tariffs – end of story.” Craig McDonald, Unite deputy Convenor at Nissan, Sunderland

“A no deal is a terrible deal for the van and light commercial vehicle market and our suppliers. It will affect 25,000 jobs locally. Take no deal off the table.” Paul Geary, Unite deputy convenor at the Vauxhall van plant, Luton

Steve Turner and Unite’s manufacturing representatives are meeting Michael Gove at 15:15 hours today (Wednesday) at the Cabinet Office, Whitehall and are available for interview before and after the meeting.

Unite has been campaigning against a no deal Brexit warning that such an outcome will devastate employment and manufacturing right across the UK.