Unite members working for Honda in Swindon and in its supply chain companies travelled to parliament today Wednesday (March 6) to enlist the support of MPs as they step up their campaign urging Honda to rethink plans to close its Swindon factory. 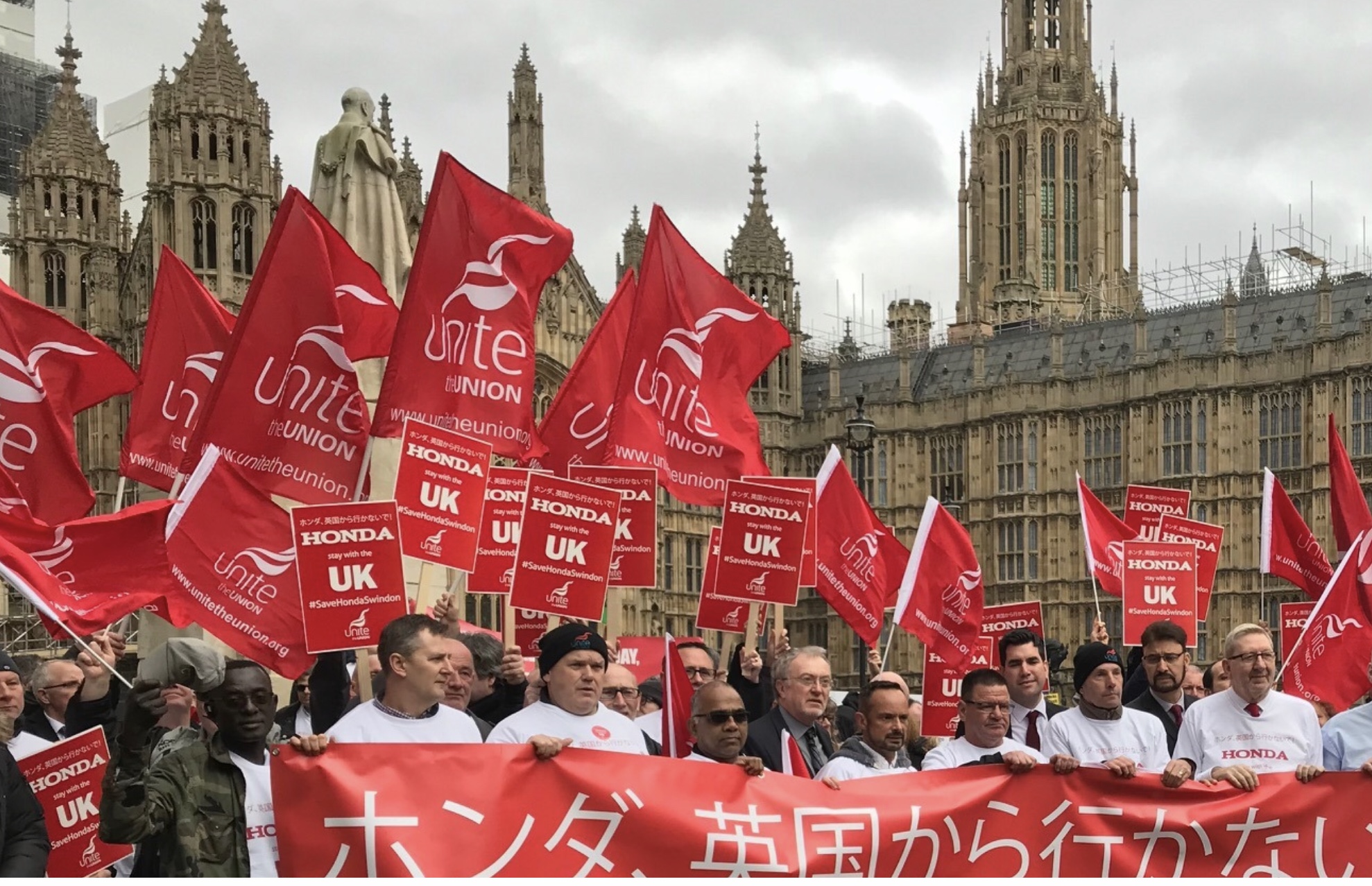 The workers were joined outside Parliament by a group of middle managers, and Honda workers from Ghent, Belgian as well as Unite Executive Committee members and by many politicians.

Unite general secretary Len McCluskey addressed the crowd, outraged at the way workers have been treated at the hands of Honda.

“Talented workers have been disgracefully treated,” he said. “Workers learnt of the decision to close the plant on their way home from the plant. Honda would not dream of doing this in Japan.”

And, he asked amid all this confusion, “Where the hell has the government been?” McCluskey reported that Unite was in fact due to meet with the business secretary Gregg Clark to agree a joint plan to save the plant.

“Unite will look at every single way to put pressure on the company,” he concluded to rapturous applause.

Andy Poster, Unite rep and assembly frame worker was there with over 50 colleagues to continue the fight to save the plant. “Unite is a fighting union and we won’t give in,” he said.

The effects on the community would be devastating. Phil Rodney, a worker in his 19th year at the plant lives just five minutes away from his work. Terry King has worked there for 25 years and his son Eric is in his last year as an apprentice.

A small group of middle managers also joined in the lobby. Spokesperson Karl Budd, a process team manager said what was happening would affect everyone at Honda. “It would be devastating for the whole community – whole families work there, people have mortgages.”

The group explained that many had joined Honda years ago, from all over the country on the understanding that working for Honda truly was a job for life. And what was happening now was against the whole Honda ethos of being part of a ‘family’.

Indeed it was this very point that persuaded Belgian Honda worker Veronique Debaere to join the fight for Swindon. “What Honda is doing is inhumane,” she told UNITElive. “So many workers will lose their jobs not just here in the UK but in Belgium, Italy, Spain and Turkey. Their ethos is ‘first man, then machine’ – what they’re doing is a complete contradiction. I’m here in solidarity for Swindon colleagues.”

A photo opportunity followed where a giant banner in Japanese and English was unveiled and a large #SaveHondaSwindon petition was signed by many – including Unite general secretary Len McCluskey. A Belgian petition was also signed.

Launched last Friday (March 1), the Swindon petition has surged to over 13,000 signatures over the weekend. The petition addressed to Honda’s president and chief executive officer, Takahiro Hachigo, highlights how 3,500 direct jobs and over 12,000 more will be lost across the supply chain in the south west and the wider UK.

In a direct plea to the car boss, the workers urged a rethink, saying that Honda would benefit from moves to ensure the UK is a world leader in the new technology car manufacturing needs to thrive.

Unite assistant general secretary Steve Turner was delighted with the rally’s outcome. “It was inspiring to see our Honda members backed by Belgian colleagues, Unite EC members and MPs – all out in solidarity for our members’ futures today.

He continued, “Let’s be clear on the scale of the economic and social catastrophe facing our communities if this plant closes. Not only would 3,500 jobs would go directly at the plant but some 15,000 more as the dozens and dozens of small and medium firms necklaced across the country suppling only to Honda.

“We need central government, local and regional authorities as well as innovative supply chain partners to join us in developing a viable alternative plan that maintains both Honda in Swindon and the UK automotive industry as a jewel in the crown of UK manufacturing.

“The closure of the Swindon plant would be devastating not just to the local community and south west economy, but for skills and jobs in the wider supply chain throughout the UK.

“We are calling on Honda to rethink its plans to close its Swindon plant and instead give its loyal dedicated workforce the opportunity to be at the forefront of the global revolution in the next generation of cars,” said Turner.

And if you have yet to sign the #SaveHondaSwindon petition now is your chance.

“Unite is urging as many people as possible to back Honda Swindon’s highly skilled workforce, and the tens of thousands of workers in the supply chain who support them, by signing the petition and telling Honda to stay in the UK,” he added.