Leaving the EU without a deal will be bad for Britain’s workers and economy. 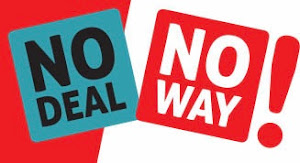 No deal will not result in a clean break from the exhausting morass of Brexit – it will simply prolong the process of building a new relationship with the EU while inflicting unnecessary damage to the country.

A cliff edge Brexit is not in the national interest and will harm jobs and living standards, which is why Unite is saying No Way to No Deal.

It will cause chaos to cross-border trade and supply chains, sever regulatory ties and international partnerships and threaten hundreds of thousands of jobs.

The prospect of crashing out of the EU with no agreement in place has already impacted business investment and slowed Britain’s economic growth.

Leaving without a deal will further erode confidence in the UK’s standing at home and abroad as a reliable and secure country to do business in.

The price of no deal will not be paid by irresponsible Tory ministers who know how damaging it will be, but by working people – many of them Unite members.

The message from Unite is clear: No deal is in nobody’s interest and the government must take it off the table.