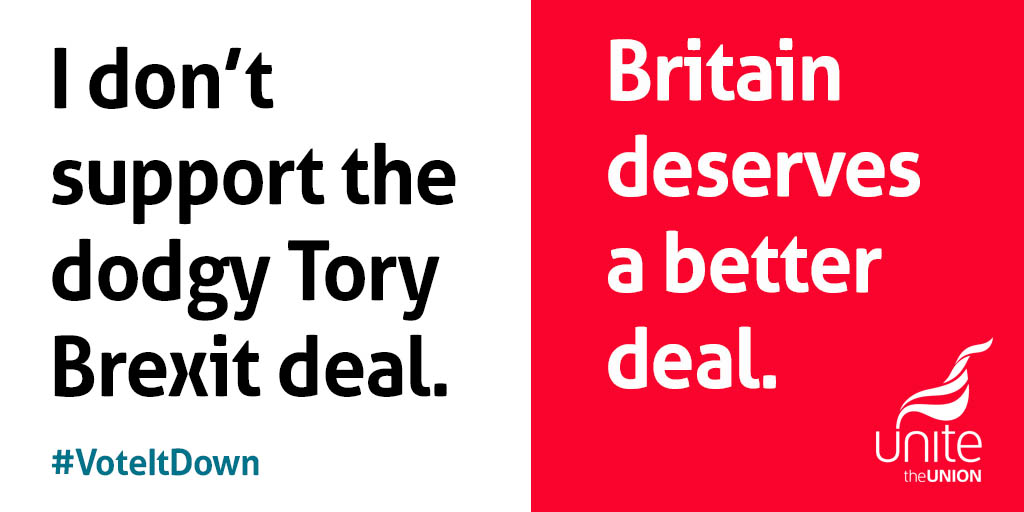 As Parliament prepares to consider the Brexit deal Unite, has launched an appeal to its members and to workers across the UK to unite for a better deal.

As part of the campaign, a new Unite film outlining the perils of Theresa May’s Brexit deal, was launched today alongside the website www.uniteforabetterdeal.com (4 December) as the union steps up its campaign urging MPs to vote it down.

The website enables Unite members to write to their MP to ask them to reject the deal.

The message from Unite is: “The UK deserves a better deal.”

The union’s #VoteItDown campaign is calling upon the country’s 650 MPs to reject the deal when the crunch vote is taken on 11 December, after a five-day debate.

The two-minute film focuses on the concerns of Unite members.

The film highlights the wide ranging flaws in the prime minister’s deal – from the threat to the automotive industry and the dangers to the NHS from counterfeit medicines to the possibility of a ‘hard’ border between the Irish Republic and Northern Ireland – showing why the union cannot support the deal.

As one Unite member said of the continued uncertainty: “21 months of breathing space won’t secure the next vital vehicle model. It only gives bosses time to relocate.”

Another member warned that this deal will risk vital health services, such as radiotherapy to battle cancer.  A third member, a car worker, called the deal a `dog’s dinner’.

Unite general secretary Len McCluskey said: “Our members are telling their union that the package that Theresa May brought back from Brussels threatens the future employment of working people, and even the safety of the public and our NHS services.

“And it does not bring the certainty for the future that industry and business need, as admitted by the chancellor Philip Hammond when he said that the agreement on the future relationship with the EU is not legally binding.

“This is now the time when we look to MPs to act in the national interest and vote down Theresa May’s deal.  We need a decidedly better settlement to be negotiated, one that will safeguard the future welfare and livelihoods of the UK’s 66 million citizens.

“We believe only a permanent customs union with barrier-free frictionless trade will secure jobs, investment and hard won workers’ rights.”