Unite has published a briefing paper for representatives on why the union is calling on MPs to vote down the government’s EU Withdrawal Deal if it is put before Parliament. 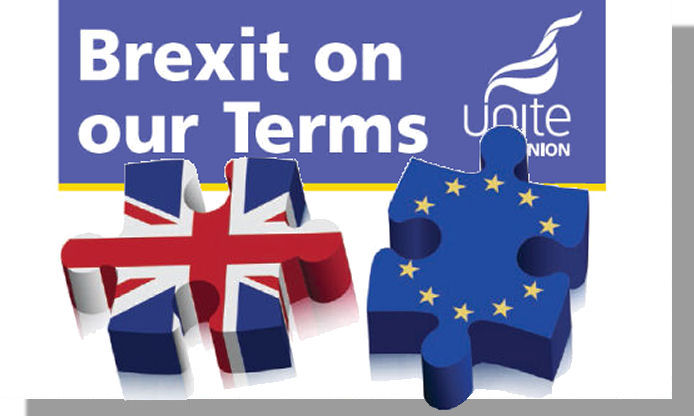 The briefing explains that the deal fails to meet the red lines set by Unite, the Labour Party and the TUC, fails to deliver a permanent customs union – which is vital for investment and job security – and fails to guarantee no hard border in Ireland on a permanent basis.

In terms of a future trade deal, the briefing points out that the Withdrawal Deal only provides a vague non-binding declaration that omits protections for workers’ rights and barrier-free access to the Single Market.

The briefing states: “This blindfold Brexit is a leap into the unknown. It prolongs the job-threatening uncertainty about the UK’s future relationship with Europe.

“The false choice of a harmful Tory deal and no deal is a political trap. If the Government cannot table a deal which meets the tests our movement has adopted a General Election becomes a real prospect.”

Unite general secretary Len McCluskey said: “Be in no doubt, limited in aim and vague in detail, this deal fails our tests. It is not in the interests of working people, it is only in the interest of Theresa May’s survival in front of a divided party.

“Unite utterly opposes the false choice of a bad deal versus no deal. We have an alternative which would respect the 2016 referendum, offer permanent security for jobs and working rights, and command the support of a Parliamentary majority.

“Rather than setting out a real vision for what the future EU-UK relationship should be, the Tory deal seeks to rush us out of the door with no agreement in place. The government are asking us to don the blindfold and take a leap of faith. That is unacceptable.

“We must not be blackmailed into supporting a bad deal. We must hold our nerve. This vote raises the prospect of the general election our country desperately needs. To that end Unite calls on Labour MPs to vote this deal down.”