The government “does not care” about the damage a no deal Brexit will do, Unite said yesterday after meeting with cabinet member Michael Gove. 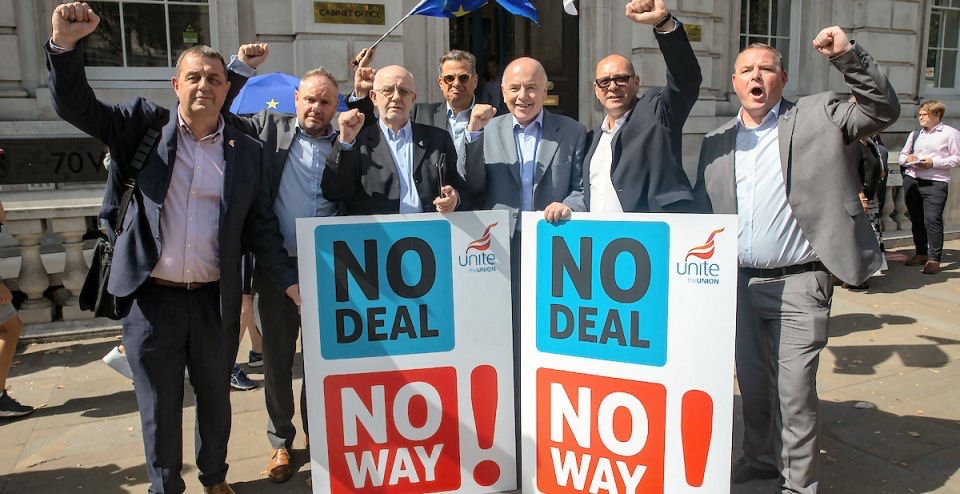 A delegation of long-serving manufacturing workers with deep knowledge of their industries met with Gove, the minister responsible for coordinating the government’s Brexit strategy, in a bid to persuade ministers to comprehend the enormity of a no deal Brexit on working communities.

It was the second meeting Unite reps have had with Gove over the issue, with the first taking place in August.

Speaking after the meeting, Unite assistant general secretary Steve Turner said, “Convenors from across our manufacturing industries met with Michael Gove again today, to get answers to the serious questions we put to him a month ago about stopping a no deal Brexit We didn’t get any.

During the meeting, the reps pressed home the devastating impact crashing out of the customs union and single market without a dealwill have on their industries and communities.

Speaking before the meeting, Unite convenor at British Steel Tony Pearson said, “British Steel supports the jobs and livelihoods of 25,000 people directly and across our supply chain. We produce a product vital to our country’s manufacturing base but it will be hanging by a thread if no deal is the Brexit outcome.

“I come from a community that was hit hard by the impact of 1980’s Conservative ideology under Mrs Thatcher. We will not let another government destroy our jobs and communities.

“These are people we are talking about, with bills to pay, families to raise and communities to support.  We will not allow them to be treated as collateral damage for those hell bent on a no deal or bad Brexit.”

Mick Graham, Unite convenor at Jaguar Land Rover said he doesn’t “recognise the rosy glow that Mr Gove and other ministers are trying to put on their Brexit strategy”.

“It bears no relation to the realities of Jaguar Land Rover where we rely on frictionless trade and open customs arrangements to ensure the just in time delivery of the 20m components our plants consume every day,” Graham added.

“Right now, I can’t look my colleagues in the eye and tell them that everything will be fine because it won’t be. This is Mr Gove’s chance to convince me otherwise.”

Unfortunately, the reps were left disappointed by Gove, stating that they’d “received no answers at all” and have no confidence that the government has any intention of preventing damage to their industries and the livelihoods of their members.