A shocking report on the slave like conditions of non-EU lorry drivers in Europe has raised concerns about the potential consequences if Britain’s driving regulations are attacked post-Brexit. 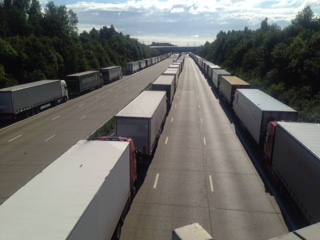 The research, by Dutch union FVN, found that drivers from countries such as Belarus, Moldova and Ukraine were driving on EU roads for wages as low as €0.79 an hour – painting a picture of “an unappetising race to the bottom” that Unite said must be resisted in the UK.

The report states, “The use of drivers from outside the EU has grown explosively and there is no regulation at all. Via mainly Poland drivers from Moldavia, Ukraine, Belarus and even from the Philippines come to Europe to work in the West.

“The drivers are poorly or sometimes not insured at all. The FNV investigation shows that there are even drivers who work for €0.76 per hour and who live for months in a row and illegally in their cabins.”

The research, based on extensive interviews with drivers across Europe, also uncovered fraud involving driving and rest times and falsifying documents on salaries.

Unite national officer for road transport and logistics Adrian Jones said, “Unfortunately, the report by our Dutch colleagues only adds to what we have known about for some time – that non-EU-drivers are ripe for exploitation by unscrupulous employers across the continent.

“This insidious trend is an unappetising race to the bottom that must be stoutly resisted in the UK, especially as we enter a post-Brexit world where long-standing regulations could be under threat.”

Jones said abuse of drivers adversely affects UK companies that have signed agreements with Unite on pay and conditions.

He added, “These firms are striving to do the right thing, but their tight margins of profitability are undermined by these ‘rogue’ employers whose activities appear to be rife across Europe.

“The answer is clear – stronger enforcement of the law is required, so that decent standards, good pay and civilised working conditions are maintained for all drivers, whether they are from the EU or elsewhere.”